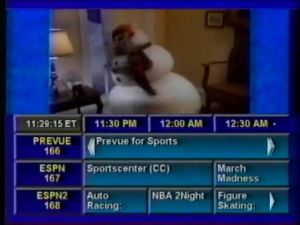 Example of PC Prevue with its initial branding. 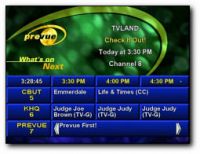 Example of PC Prevue with 1998 branding

PC Prevue (sometimes referred to as Prevue Junior) was an iteration of the Prevue Guide software which ran on Microsoft Windows instead of AmigaOS, similar to Hollywood, the software the TV Guide Channel utilized.

The software seemed to have support for both a split-screen format similar to what was used on Prevue Grid but also had a feature that promoted programming On Now, Coming Up Next, Movies, Sports, which includes its channel, time, and the next time the program will air. The listings seemed to lack any scrolling capabilities and like other versions, included weather information between every rotation. One copy of PC Prevue exists, which is version 2.4, dated 2/27/1997 and has been dumped.